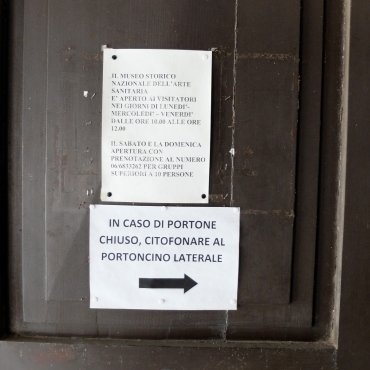 Cassandra had a bit of a time finding this museum. While it’s centrally located just off the Lungotevere close to Saint Peter’s, she never really thought she’d find a museum inside a working hospital so she didn’t see the entrance even when it was right under her nose. Down the ramp towards the Museo (and the hospital) it’s all hustle and bustle, ambulances, patients, relatives of patients: typically Roman chaos. But since this museum is dedicated to “Arte Sanitaria” or the art of medicine, it all makes perfect sense. 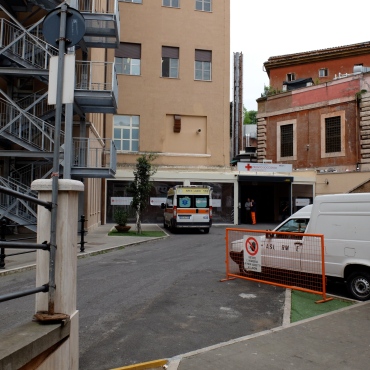 ambulances to the left

The Museo Storico Nazionale dell’Arte Sanitaria is through this portico

What doesn’t make perfect sense is the museum Director. The museum is only open occasionally and it is a strictly “no photo” venue.  Il Direttore is actually suing someone who took some photos there and this is why: he has a paying job, but “his” museum, as far as he’s concerned, has no funding. He’s making sure that no body “makes any money” off his museum by taking photos, writing blog posts etc because why should they make money when he’s not making money? Aside from the fact that Cassandra has yet to make a dime off her Ghoul’s Guides, and aside from the fact that science museums’ priority is usually to instruct, not to earn: how is he ever going to be able to pitch to get more funding if he can’t show how many potential visitors there are to this fascinating museum? Has this guy never heard of free publicity? If he loves his museum shouldn’t he be happy to have as many people as possible appreciating it? Even if all he’s getting out of the deal is a stipend? Well, let’s just say that this isn’t the first time that Cassandra has found Italy to be a country inhabited by people possessed by perverse logic. This museum’s director is not looking for a hub of activity, he’s looking for a handout.

That said, this is a fabulously ghoulish museum that’s well worth the memories even if you can’t capture the moment.

Once you get past the hurtle called il Direttore you’ll find a wonderful place with a long and complicated history. While most of its collections are much older, the Museo proper was founded in 1933 when the Santo Spirito Hospital granted the Museo space on its grounds. This particular hospital, founded in 1198 by Pope Innocenzo III, was also a teaching hospital with a library, an operating theater and a spezeria or pharmacy. Spezie is the Italian word for spices and medicinal plants back when all medicine was herbal. Part of the Santo Spirito’s collections have been incorporated into the Museo’s collections and the two are now one.

You get to the museum past a portico, through a large room that used to be a 64 bed military hospital ward and is now a conference room, then up a double staircase. Along the way, walls are decorated with anatomical prints drawn by Antonio Serantony under the direction of the anatomist Paolo Mascagni. (You’ll find the same prints at the Museo dell’Arte Sanitaria in Naples too, some framed on the walls and some still in their original large format book) The staircase balustrade is decorated with gesso busts of doctors from Hippocrates (born in 460 BC) on up. 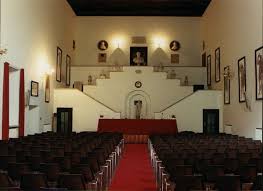 The Museo dell’Arte Santitaria’s collections are in the rooms at the top of the stairs. The prints along the walls are Serantoni’s anatomical studies

Outside the first room you’ll see a medallion of the Cardinal Francesco Saverio de Zelada (1717- 1801) who was better known for his collections of books, coins, medals and things of science than for his religious fervor. The 56 anatomical models in the first room of the Museo, the Sala Flajani, made in Bologna in late 1700s by the sculptors Ernesto Lelli and Battista Manfredini under the direction of the anatomist Carlo Mondini, belonged to Zelada who bequeathed them to the Ospedale di Santo Spirito after his death. As the Ospedale had an important maternity ward, there are also 16 wax models of difficult (if not fatal) births, ruptured uterus etc. One female wax model is delicately holding up her own flayed skin so that all can see her guts.

The Sala Flajani is wonderfully ghoulish. The anatomical waxes and other oddities, rarities and monstrosities are displayed in cases with hand-blown glass fronts and periwinkle blue painted backs some of which used to hold a monastery’s manuscripts. The cases to the left hold a variety of malformed babies, monkey skeletons (for comparative anatomy before Darwin) and some dried limbs, the cases facing the door hold the anatomical waxes and the cases to the right hold a strange combo of the consequences of syphilis, rickets, the earliest known dentures, a skull that is said to be Pliny the Elder’s and a collection of kidney, bladder and liver stones, the human equivalent of baroque pearls Cassandra assumes. There is also a preserved macrocephalic baby, sitting on a bench with his legs crossed and a hand under his chin as if he were an old barfly. 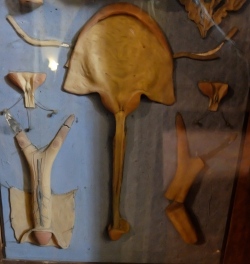 At the center of the sala there is a coffer that used to hold medicinal herbs and a large contraption called the Tempietto, the temple that was used for making china, a good stiff drink made from the bark of the Cinchona officinalis plant, found in Peru. The plant was named for the Countess of Chinchón, who is said to have been cured of malaria by drinking its extract. Jesuit missionaries smuggled seeds and saplings out of South America, British and Dutch colonists smuggled them into Asia and tonic water, which contains quinine or cinchona extract, was born. Not as a mixer for cocktails, but as a prophylactic against malaria.

The following room is called the Sala Capparoni and is themed around medicine in ancient times. There is a collection of wax and silver ex-votos in the shape of body parts, from Etruscan to almost modern times, each one telling a long-ago story of illness, faith and healing. In fact, these model arms, ears, legs, intestines etc would be given as a sign of gratitude to the deity, saint or sacred image that one prayed to for healing. Once cured, an ex-voto would be given not only in gratitude  for deliverance from suffering, but also as testimony to later unfortunates of the received help. In a pagan country turned Catholic, praying and making offerings could never hurt: there was a deity then turned patron saint of just about every pathology, ailment and illness and you never know when one might intercede on your behalf. Other “cures” are a narwhale tusk and a bezoar, or hairball, long thought to be an excellent antidote for poison.

The next room is the Sala Carbonelli which has a large collection of surgical instruments, microscopes, medicine bottles, majolica apothecary jars or albarelli, portable pharmacies, phrenology heads and dentist’s tools that you’d really rather not be in the same room with. There is also a macchina elettrostatica for shock treatment