The entrance to the crypt from Via Veneto

A visit to the Capuchin Crypt is eye opening and bone rattling.

Ah, la Dolce Vita! Anita Ekberg, Marcello Mastroianni, the very essence of Italian glam! Only in Italy could La Dolce Vita have existed; only in Italy’s Eternal City could it have existed cheek to jowl with La Cripta dei Cappucchini, one of the world’s top ossuaries.

Sometimes it seems that wherever there is spendid Italian style there is also some seriously ghoulish substance nearby and Via Veneto is no exception. Long before Federico Fellini was filming nightlife along Via Veneto, the Marquis de Sade, Nathaniel Hawthorne and Mark Twain were all moved to write about the scary sight they had seen there by day: the Capuchin Crypt. 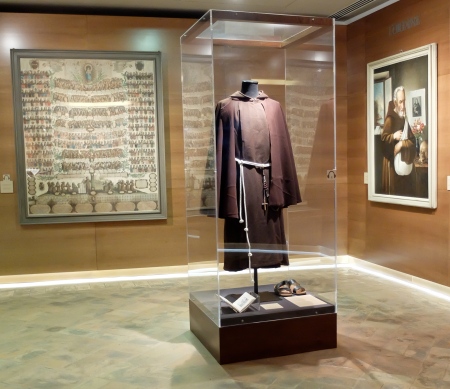 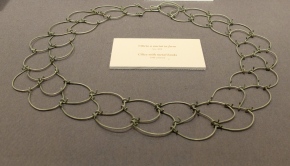 Capuchins wear hooded brown habits belted with rope and sandals on their feet. They are bearded but don’t shave their heads.

Tired of ghouls just coming to be ghoulish, the Capuchins have set up a museum that guides you through a brief history of their order before you see what’s left of about 4,000 brothers of their order. You lace Ikea-style through a series of exhibits that explain that the Order of Friars Minor Capuchin was founded in 1520 by a Franciscan who felt his order  was getting a bit too fancy and wanted to go back to St. Frances of Assisi’s true way of life: austerity, simplicity and poverty.  Famous Capuchins include Italy’s adored Padre Pio, now a saint. A showcase has a sheet stained by the blood from his stigmata.

The slick and modern prelude museum has bits and pieces from Capuchin daily lives; devotional ex votos, crucifix, aspergilla, instruments of penance and mortification of the flesh such as disciplines (one “takes the discipline”) and cilice. There is also a beautiful Caravaggio painting of St Francis contemplating a skull.

Then comes the ossuary.

The crypt runs the width of the church above it and is at ground level. It’s divided into five chapels dedicated to different featured bones. The first chapel is called the Tre Scheletri, the Three Skeletons. Two of them against the back wall, flopping a bit forward and dressed in their dusty habits, are said to be members of the Barberini family. The Barberini Princess hovers above, bearing a scythe and a set of scales to symbolize death and judgement.  The floor is earth brought from the Holy Land and it looks and smells freshly turned.

This is a “no photo” venue but it would take more than a thousand words to describe the profound effect that seeing pieces of all of us dissembled and used just for decorative and architectural qualities can have. Talk about hidden potential. Vertebrae dots, rib curlicues and humerus outlines decorate entire structures made out of skulls and bones stacked tighter than a Swiss woodpile. Heidi meets Pol Pot. Chandeliers are elegantly crafted from a select smorgasbord of bones. Some well preserved or better behaved mummified friars have been left whole and in their habits, either propped up in skull niches or reclining in femur grottoes. Cassandra almost said “how cute” when she saw the Franciscan symbol of one nude arm and one dressed arm made out mummified remains crowned by jawbones.

It’s hard to beat the wording of the captions  so Cassandra won’t even try. Here you’ll see, “a tondo of jawbones adorned with vertebrae set in an oval frame of coxix and pelvis,” there you’ll see an, “arcosolium of longbones,” and a “large canopy of pelvises with a hanging frieze of vertabrae.” After a while it starts to sound like the menu in a Michelin starred restaurant.

Nobody knows who the artistic director was here, but it’s almost certain that he was aiming to remind us all that the body is just a recyclable container for the soul. Memento mori, What you are now we once were, what we are now you will be too. The final chapel is dedicated to the resurrection then it’s on to the gift shop and a much needed breath of fresh air. 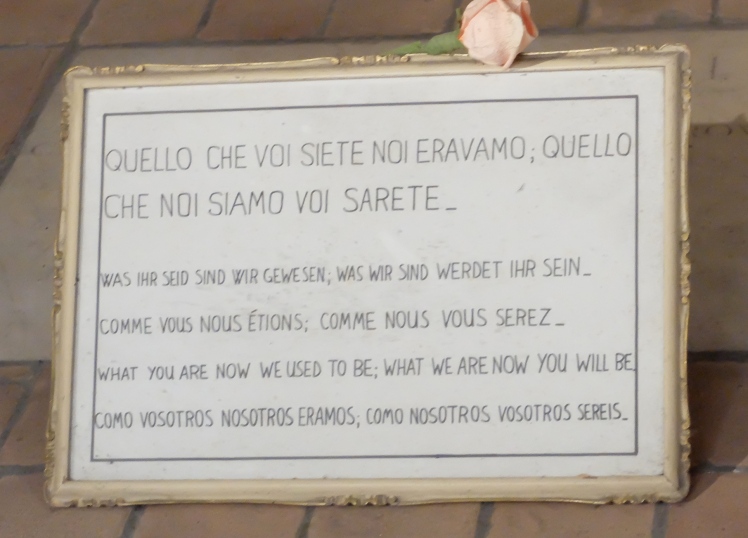 The Marble Faun by Nathaniel Hawthorne

One thought on “Rome, The Capuchin Crypt”