Girolamo Segato was a loner and an introvert but a bright and able student who became a cartographer, Egyptologist and naturalist. In 1818 he joined an expedition to Egypt where he played the tourist, scratching (graffiare in Italian, the root word for graffiti) his name onto the Temple of Dendur. The temple is now at the Metropolitan Museum in New York, complete with Segato’s tag.

While in Egypt Segato had himself lowered into a pyramid and came out three days later a changed man, obsessed with mummification. In 1823 he went back to Italy, settled in Florence and developed a technique for the mineralization of human remains that left his materials their original color and elasticity. 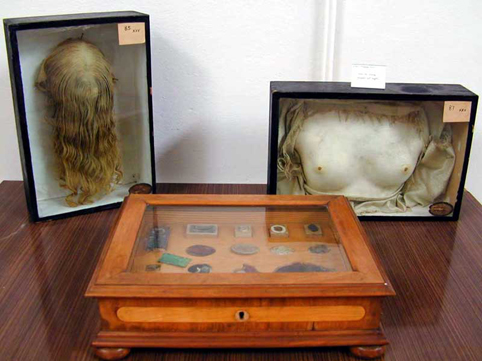 He displayed his smaller successes in a kind of traveling salesman’s sample case: some fish, a slice of salami, bits of scrotum. The pieces that were too big to carry around- human heads, breasts etc, he kept in his studio.

The preservation of anatomical specimens in a form that was as similar as possible to the way they were when “fresh” was essential to science and Segato had certainly found a way to do it. But maybe he was a bit too successful:  people began to call him il Pietrificatore, the Petrifier, and whispered that he practiced Egyptian black magic. Others said that the real reason his experiments looked so lifelike was because his material wasn’t all that dead when he started working on it. Segato wanted to be accepted as one of the boys, a bona-fide scientist in the city that was at the epicenter of science in his day, but did nothing to help himself. He held classes with his back turned to his pupils because he couldn’t stand to look them, or anyone else, in the eye.

One thing is for sure, Grand Duke Ferdinand III was not at all flattered to receive Segato’s gift of a scagliola tabletop made out of petrified human remains (liver, heart, uterus, tongue, various cancers, all preserved to the best of Segato’s scientific knowledge and arranged in attractive patterns) and refused to grant funding for his experiments.

Segato’s hopes and dreams for recognition and acceptance were dashed. He burned his papers and died soon afterwards, aged 44. His secret(s) are in his tomb in Santa Croce where the inscription reads: “Here rots Girolamo Segato who would be whole and petrified if he hadn’t taken his secrets to the grave. He was a glory of human knowledge and a gloriously unhappy human.”

But not just anybody got the honor of a burial in Santa Croce, and it must be said that while Segato didn’t end up inside with greats like Galileo Galilei and Michelangelo, Florence did give him a tomb with a view. And Segato’s drastic gesture left its mark: Franceso Garnier Valletti, the maker of the most realistic fake fruit ever seen (see Torino, Museo della Frutta,) threatened to follow Segato’s suit if he was not adequately compensated for the discovery of his secret formula.