The Museo Galileo and la Specola Museum have a deal whereby if you buy a ticket in one you can go to the other for a reduced fee.

The Museo Galileo is housed in a rather austere building close to the Arno and the Uffizi yet away from the maddening hordes. Outside, the bronze column with a glass sphere on top is a sundial; the lizard’s snake-tipped tail is the gnomon, the shadow casting part that lets you tell the time.

A large part of the Museo’s collections were at La Specola, back in 1775 when it was founded by Pietro Leopoldo and called the Museo di Fisica e Storia Naturale, the Museum of Physics and Natural History. To the collection of the Medici family’s best scientific instruments Pietro Leopoldo added a few pieces of his own and now the Medici and Lorraine collections are here, just waiting for you to explore them. 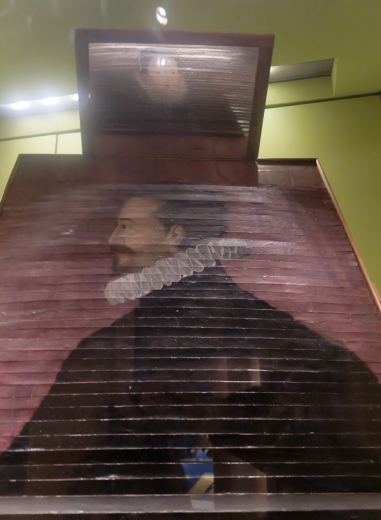 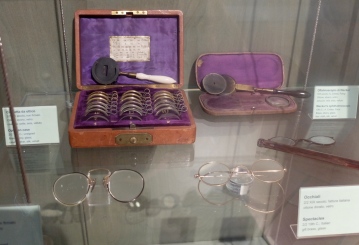 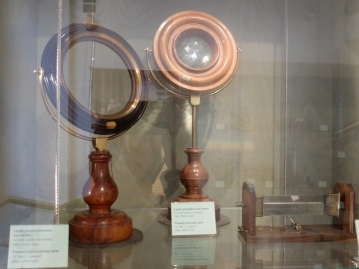 Lenses of all kinds and optical illusions: science as a parlor trick

The tour through the Museo gives you an insight into the consideration that the Grand Dukes had for science and learning and how important staying on the then cutting edge of technology was for them; their version of high tech was magnificent, as behooves Grand Dukes who valued science as much as the arts. The first few rooms on the ground floor have some weaponry, various kinds of lenses and a few optical illusions: science as a parlor trick if you will. The Medici family had all kinds of instruments for charting, calculating and measuring and the next rooms are a triumph of polished brass, etched ivory and gilded leather for instruments to do things like tell the time even at night and calculate the date before the Gregorian calendar existed. While she admires the form without really being able to grasp the function, Cassandra can only wonder what the owner’s manuals for these beautifully mysterious objects looked like.

Can a machine be beautiful even if it isn’t a Ferrari? It certainly can, and here you’ll find some of the most beautiful machines ever made. Really, Cassandra swears, they are absolutely beautiful! Take, for example, the huge, splendid armillary sphere that sits in the center of a round, dramatically dark room with curved, puce colored walls. Antonio Santucci built the sphere for Ferdinand I de’ Medici (note the Medici family crest) in 1588 to represent the “universal machine” of the world and the heavens. Planet Earth is placed firmly at its center which makes it a Ptolemaic armillary sphere, because if the sun had been at the center it would be Copernican. What does all this mean? Don’t ask Cassandra, but go let the sphere tower over you in all its bent, carved, gilded, cogged, mechanical beauty and ponder the meaning of Oh! Heavens!

The armillary sphere by Antonio Santucci 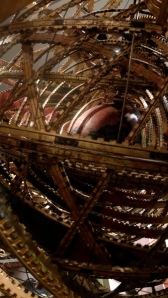 The armillary sphere by Antonio Santucci

There is a splendid collection of globes of both of the earth and of the skies by Vincenzo Maria Coronelli, Egnazio Danti, Matthäus Greuter, Adrianus Veen, Jodocus Hondius and Willem Janszoon Blaeu, but perhaps Cassandra’s favorite is the reproduction of the map of the world by Fra’ Mauro. He did it as he saw it in 1457: nice and flat and with Adam and Eve being reprimanded in a corner by their Creator.

You can thank the Florentine explorer Amerigo Vespucci if you come from a country called America as you’ll learn in the section devoted to the science of navigation. Then it’s on to the science of warfare (there’s something for everyone) until you get to the room dedicated to the star of the show: Galileo Galilei himself, “un eroe e un martire della scienza,” a hero and a martyr of science.

Busts of Amerigo Vespucci and Galileo Galilei, the Florence and Pisa airports respectively.

While Galileo did many things that were scientifically proven to be right, he did one thing that was wrong: he shook up the powers that be. Galileo was a Copernican, that is he believed, and he worked to prove, that the Earth rotates around the Sun and that did not sit well with the most powerful institution in Europe at the time, the Church. Galileo got through his first Inquisition fairly lightly, but at the second he was found to be a heretic and forced to recant his theories. It was that or be burned at the stake, so Galileo formally recanted, but it’s said that he muttered “eppur si muove,” yet it (The Earth) moves, afterwards. 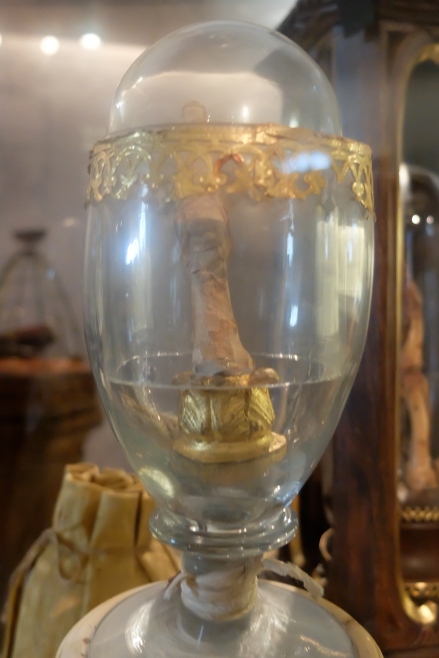 This is his party and he’ll cry if he wants to, or, in alternative, flip the bird

Yes, that really, truly is Galileo Galilei’s middle finger in the egg shaped reliquary. And in the wooden reliquary you’ll find a thumb and his pointer, plus a tooth. How they got here is beyond Cassandra, (ok, fine, she knows: Galileo was first buried in a modest tomb in Santa Croce, but then, one dark and stormy night when the Church was distracted, was moved to a truly monumental burial place and this is probably all that was left of his body) but it’s lovely to see a man imprisoned by the church get  full treatment of the kind usually only reserved for saints.

Don’t think that the Medicis were only patrons of the arts, they were also big fans and supporters of Galileo’s. Cosimo II de’Medici hired Galileo to be his son, Ferdinando II’s tutor and after his death the Medicis bought Galileo’s instruments for their collection.

The Church dropped its opposition to heliocentrism in 1835, but only in 1992 did Pope John Paul II say that the Inquisition had been wrong in judging Galileo. Perhaps Galileo could stop flipping that bird, but Cassandra guesses that by then, 350 years after his death, rigor mortis had set in and Galileo’s finger was just plain stuck. Up.

After Galileo’s room comes the most splendid collection of thermoscopes and thermometers you can possibly imagine, all in hand blown glass, so slender and so delicate it’s a wonder they’re still whole. From there it’s on to barometers and such and a bladder in a jar, used to experiment the vacuum effect. 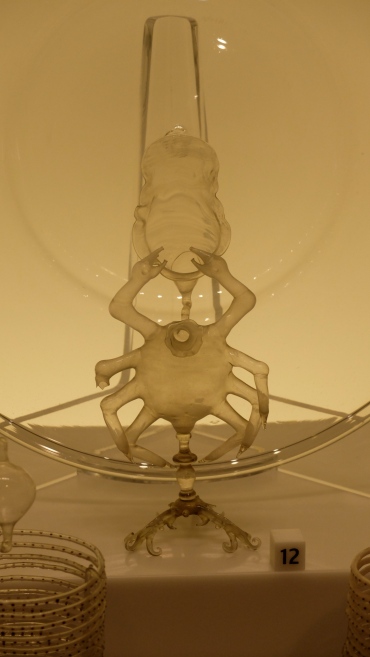 Crab glass, thermoscopes & a bladder in a bottle, things of beauty at the Museo Galileo

After Galileo and the Accademia del Cimento it’s on to optics: lenses and scopes of all kinds and optical illusions. 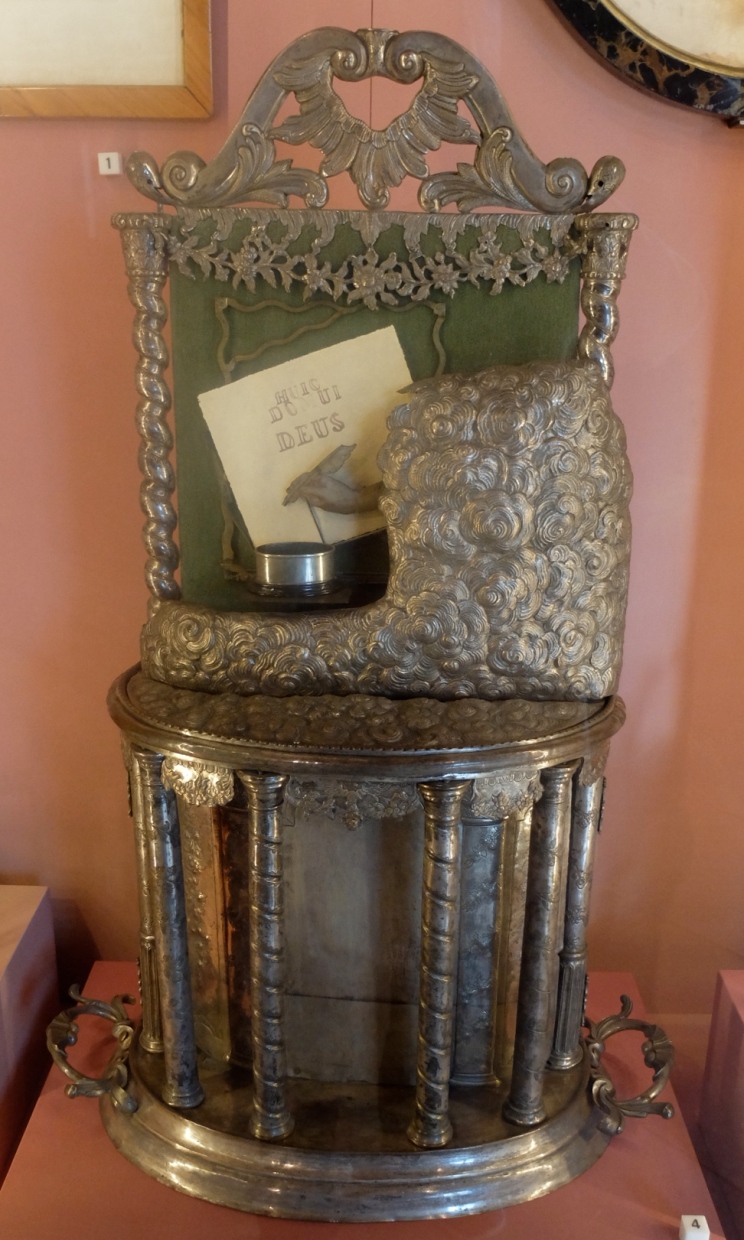 an anamorphosis, scopes of all kinds and an early automaton

On the second floor you’ll find Pietro Leopoldo di Lorena’s collections. First of all his chemistry set, where he extracted phosphorous from the urine of soldiers stationed at the Fortezza Belvedere amongst other experiments. 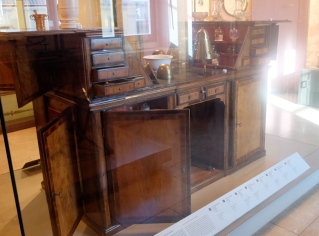 The thirty boxes in red leather with green velvet interiors were a gift from his brother, the Emperor Joseph II. They date from the mid 1700’s and contain medical and surgical instruments for everything from cranial surgery to child birth, not that Cassandra would have wanted to get involved with either in the days before anesthesia and antibiotics. The Italian doctor Giovanni Alessandro Brambilla, who worked for the Emperor, designed them and had them made in Vienna by Joseph Malliard, the finest knife maker of his day.

But the really ghoulish attraction are the wax and terracotta models of bad births. Many of them are by Giuseppe Ferrini and Clemente Susini, made under the guidance of Giuseppe Galletti, obstetrician at Florence’s Santa Maria Nuova hospital. It’s a wonder anyone would ever want to make a baby after viewing these. 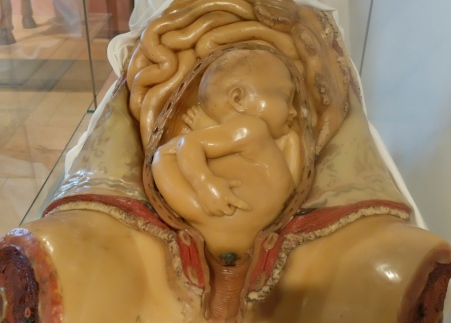 In the 1700’s science was all the craze and ladies and gentlemen would have marvelous evenings with prisms, sparks and magnets, testing their elective affinities. The next room is devoted to parlor trick science as played out in times when electricity was an absolute novelty.

A contraption with a large glass wheel was used to generate static electricity for a very popular experiment. Luigi Galvani, an Italian physicist who lived from 1737 to 1798, discovered something he named “animal electricity”. Galvani had been rubbing frog skin to produce static electricity. His assistant touched an exposed nerve in the dead frog’s leg with a metal scalpel and the two saw sparks fly and the dead frog kick. Galvani made the galvanizing (yes, the word was created for him) discovery that there was a relationship between electricity and life. Think Frankenstein.

Yet another Italian physicist, Alessandro Volta, began to wonder if it really was living things that generated electricity as Galvani sustained. He maintained that electricity could be generated chemically through the use of a pair of dissimilar metals. His voltaic pile was the world’s first battery (just think where you’d be without batteries) and produced a steady stream of current chemically. His discovery set off high voltage (yes, this word too was created for an Italian physicist!) excitement.

Leopoldo Nobili (1784-1835) was an Italian physicist who invented a number of instruments for investigating thermodynamics and electrochemistry and lots for his contraptions, called galvanometers, are here. 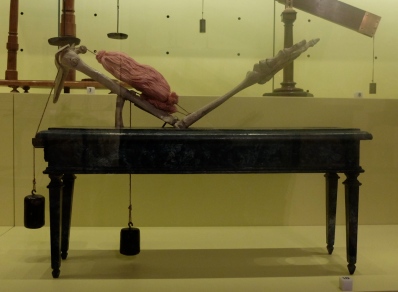 A wonderfully ghoulish contraption is a real live dead human arm, used to demonstrate leverage, in its primitive, pre-financial version. And then it’s instruments, instruments, instruments until you get to a wonderful Tabula Affinitatum, a kind of periodical table of affinities between substances represented by their alchemical symbols. And a huge lens that Grand Duke Cosimo III used to use to burn precious stones and to condense starlight. 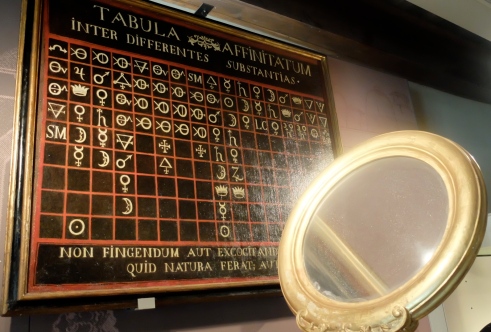 A precious stone burner and a starlight condenser, what more could you ask for? 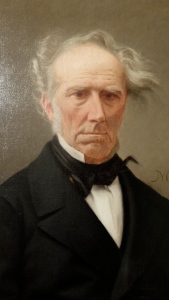 And just in case you were wondering, the hairstyle of choice in the mad scientist crowd has never changed through the centuries

What to say in conclusion? The Museo Galileo a wonderful place to visit and Cassandra especially recommends going before Christmas to get ideas for the best presents ever.