The Church of San Satiro, in a small courtyard just off Via Torino, displays front and center one of the best lies in architectural history, a hoax so beautiful and so convincing that people come in droves just to be taken in. It’s pure mathematics, or maybe- since this is a church- it’s a miracle. 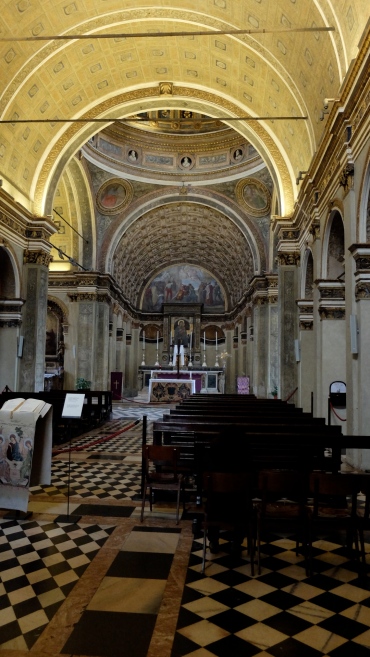 The church lies on the site of an older church built in 879 and dedicated to Saint Satiro, Saint Satyr, a pretty funny name for a saint seeing the satyrs were famous for being fun loving beasts. The current church was built from 1472 to 1482 on commission from Duke Galeazzo Maria Sforza. Giovanni Antonio Amadeo designed the façade, but Donato Bramante designed the architectural illusion that this little gem is famous for.

The church was supposed to be a Greek Cross: four symmetrical and equally long naves leading to a central domed transept. There was only one problem: an important road ran along the back of the church and there wasn’t enough room for the nave that was supposed to house the main altar. Bramante needed 9.7 meters to make the cross come out right, but he only had 97 centimeters, a tenth of the space. So he did what any Italian in his right mind would do: he fudged it. Beautifully. Perfectly. Convincingly. His idea was so great that it became the focus point of the whole building.

Are you sure you’re really seeing what you think you’re seeing?

Bramante had studied the new science of linear perspective. Filippo Brunelleschi had illustrated it, Piero della Francesca had written about it. Masaccio and Donatello had shown the Renaissance world how it worked. Here Bramante had his chance to show his stuff: by imagining the vanishing point that the viewer would have if the space were 10 times larger than it was and by working out the foreshortening of the architectural elements, he created one of first examples of trompe l’oeil in the history of art, still beautiful and perfectly convincing 600 years later.

The sacellum of San Satiro has a wonderfully expressive terracotta group of the Deposition of Christ by Agostino de Fondulis that dates from the early 1500s.

Suggested listening: The Bee Gees, How Deep is Your Love