The second part of Cassandra’s Museo Archeologico post is a visit to the adjoining San Maurizio church. It really has nothing to do with archeology, it’s just that the archeological museum is housed on land and in buildings that used to belong to the monastery that owned the church and if you want you can exit the Museo through it, something that Cassandra highly recommends. 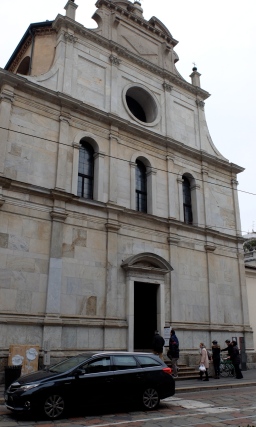 The Chiesa di San Maurizio Maggiore is also called Milan’s Sistine Chapel, but that description doesn’t do it justice. Cassandra has tried to visit the Sistine Chapel twice and both times it was so crowded that she found it healthier to just give up and leave. Her visit to San Maurizio, on the other hand, was tranquil and thoroughly enjoyable, done at her own pace and even for free. There’s just no comparison: maybe Cassandra will die without having seen the Sistine Chapel, but she will not die from trying to see it either. 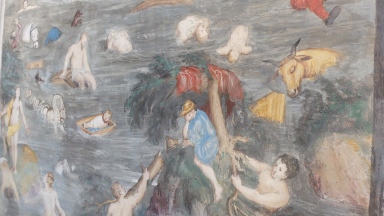 Man and beast alike die in the Flood

Entering San Maurizio through the Museo Archeologico you first enter the chapel where the nuns would hear mass. It is separate from the church that the rest of the populace would use because the Benedictine nuns were completely cloistered from society.

The frescos show bible scenes, landscapes and the Passion of Christ. 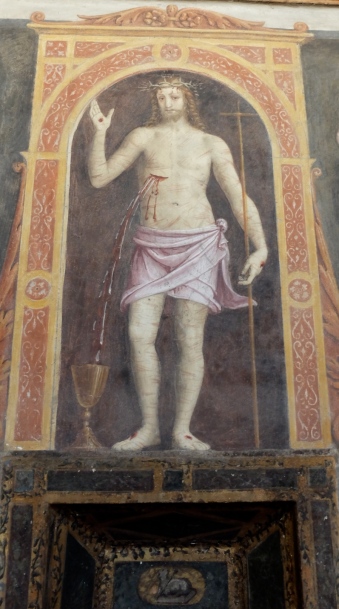 do not try to do this at home

The church that laymen could use is equally beautiful and entirely frescoed.

The church is kept open by volunteers from the Touring Club Italiano; a small donation towards their Luoghi Aperti per Voi initiative is well deserved.