Pray, do come in,

I have been waiting for you

Turin’s Museo di Anatomia Umana is very ghoulish in that when anatomy began to be studied “naturally” through parts stored in refrigerators and there was no longer any need to use this collection of “artificial” study aids, it was just left alone. It was recently restored, luckily by people who understood that a good part of its charm is in just how passe’ it is. This is 1800s science today, in its original cases and context, with very few additions and subtractions.

The Museo is dedicated to Luigi Rolando, a local boy known for his pioneering research on brains. Rolando was born in 1773 and studied medicine in Turin, later continuing on to Florence where he studied engraving, drawing and anatomical dissection. In 1814 he became an anatomy professor at the University of Turin where he devoted the rest of his life to the studying the brain. A tribute to his work is the range of brainstuff named after him: the Rolandic vein, the Rolandic and pre-Rolandic arteries, the Rolandic operculum, the Rolandic area, the substantia gelatinosa of Rolando, the fissure of Rolando and Rolandic epilepsy. The Museo’s large collection of brains may also hark back to Rolando’s day.

Prelude to the museum is a wonderful showcase filled with a truly bizarre agglomeration of oddities. A two headed calf’s skull(s,) a snail, a vulture skeleton, a mummy’ foot, a silkworm made from wax, a fetus and a pigeon. If there’s a connection what is it? 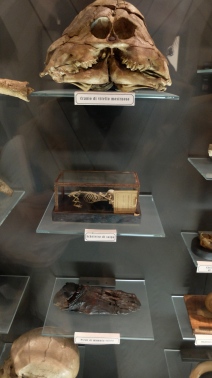 The museum, housed in a university building that is still used by students, is set up like a basilica of science: there is a beautiful, arched central nave separated by chapel-like side areas, each dedicated to a different part of the body. The body parts are “illustrated” using exsiccated human specimens and models. The effect is ghoulish, but the intent is to educate about health. In a society that saw physical and moral well-being as being inseparable, good health was seen as essential for a harmonious society.

a temple of science

But back to the basilica: what looks like a martyr saint with her guts spilling out to the immediate right as you walk in is actually the oldest piece in the Museo’s collection, a papier-mâché anatomical model of a pregnant woman that dates from 1739. Across from her is a papier-mâché man called “Lo Scorticato,” the Flayed Guy from Dr Auzoux’s famous laboratory in France. As a young medical student, Louis Auzoux (1797-1880) was frustrated with frequent shortages of human corpses. Not very many people wanted to leave their bodies to science, the Church was against it and, in the days before refrigeration, even if there was a body it could only be used for a little while before it began to decompose. Using a secret papier-mâché mixture, Auzoux began producing accurate anatomical models that could be “dissected” piece by piece. Auzoux detachable models were sturdy and inexpensive, could be used again and again- and they didn’t rot.

But compare Auzoux’s man to the other men in the Museo Anatomico and all you can say is that he looks fast, cheap and easy. While he may be anatomically correct, he is completely missing that element of hyper reality that the equally correct wax models have. But papier-mâché models cost less than a tenth of similar wax models and there is a beauty to that.

Guess which models get the inlaid display cases and velvet cushions

The Museo di Anatomia Umana’s collection of wax models is quite vast and counts over 200 pieces, most still in their original display cases. In the 1800s the principal schools for making wax anatomical models were in Florence and Bologna: Florentine models were made entirely from wax, Bolognese models had wax parts worked around real bones. In 1815 Luigi Rolando, who had studied anatomy in Florence, established a “Gabinetto di Lavori in Cera” where wax anatomical models could be produced. The Italian word for making these models is “ceroplastica,” the French word is “moulage.” Torinesi Luigi Cantù and his son Giuseppe worked their models with the Florentine technique, entirely from wax, but demand was so great that in 1830 the department bought models both in Florence (there are pieces signed by Florentines Remigio Lei and Francesco Calenzoli) and in Naples, another important production center. 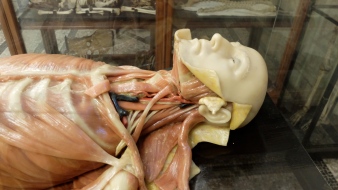 Luigi Rolando was a pioneer in the study of the human brain, so it’s no surprise that Turin was an important center for all brain sciences and even some brain-related pseudosciences. Which brings us to phrenology.

Phrenology, very popular from the early to the mid 1800s, was based on the premise that since the brain is the organ of the mind, and since certain brain areas have specific functions, and since the brain lives and grows inside the skull it must then be possible to know quite a bit about a person, their tendencies and talents, by measuring their skulls. After all, a strong man has big biceps because he exercises, therefore it only follows to logic that a generous man should develop that part of his brain, and therefore his skull, where generosity lies. It’s as if brain and skull worked hand in glove.

Phrenology was developed by German physician Franz Joseph Gall and part of his collection of over 1000 “teste frenologiche,” skulls and plaster casts used for phrenological study, has been at the Museo since 1913. By then the general thesis was that phrenology was not a science. The Accademia di Medicina donated their now-useless collection of phrenology skulls to the Museo and that was that. In the mean time, Gall’s assumption that character, thoughts, and emotions are located in specific parts of the brain is now considered to have a basis in reality. 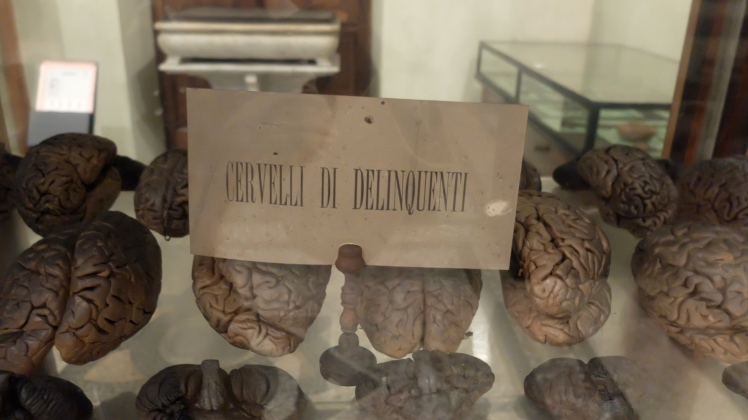 Plaster casts of Raffaello and Napoleon’s heads are alongside a selection of criminals with names like Il Dragone di Caramagna and L’Iena di San Giorgio. And one woman, Eva Kattel, a fortuneteller who, although she was already rather old, took two lovers a day daily. I wonder what part of her brain was found to be over-developed.

And to wrap it all up, a human interest story. Towards the apse end of this basilica of science there is a lovely showcase displaying a skeleton with a brain in a covered cake stand by its feet. Get closer and you’ll read this: “Not being a great fan of either cremation or cemeteries I would rather that my bones be laid to rest in the Istituto Anatomico where I spent the best years of my youth and to which I have dedicated my whole life. I also want my brain to be preserved with the process that I invented and ask that it be preserved along with the others in the Museum.” The quote is from Carlo Giacomini’s (1840-1898) will.

Giacomini was an anatomist, neuroscientist and professor at the University of Turin. His wishes were granted and this is his skeleton. His brain was preserved using the same combination of zinc chloride, alcohol and glycerin that Giacomini had presented to the Royal Academy of Medicine of Turin in 1879. The preserver found that Giacomini’s own brain had what is called a Giacomini band of uncus gyri parahippocampalis. 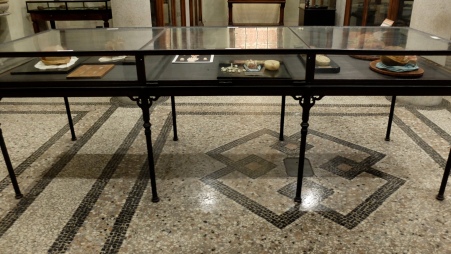 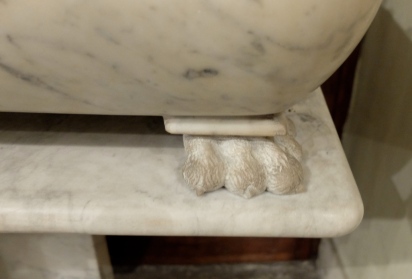 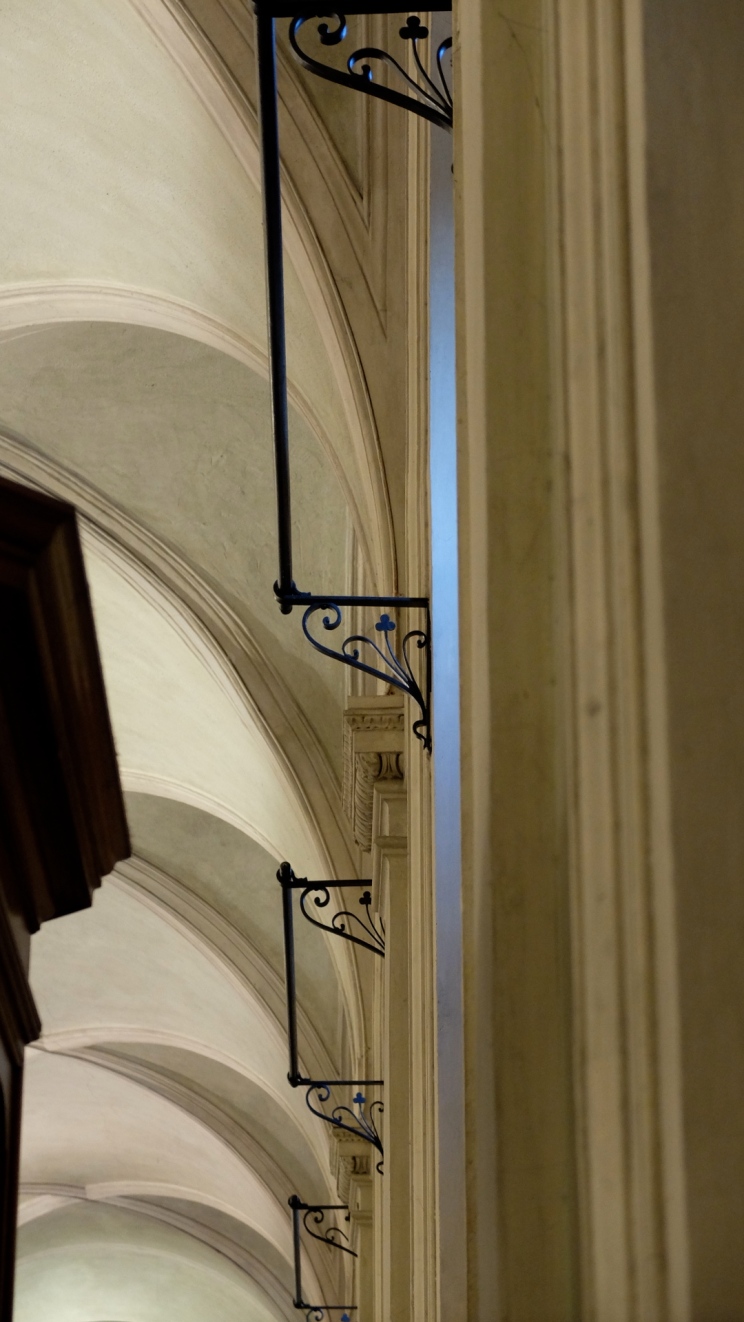